Daily LogisticsDiscover The World Of Logistics 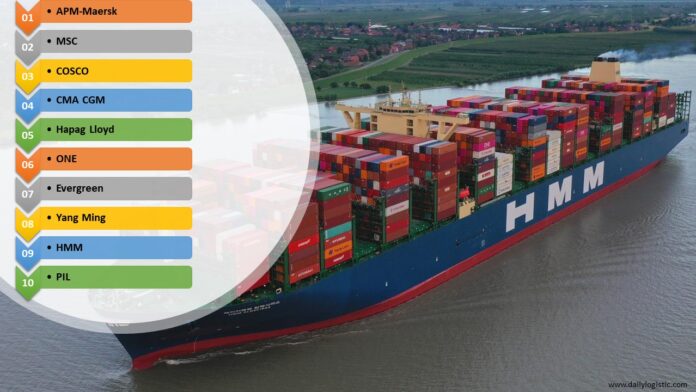 The 10 largest container Ship operators (By Capacity) mentioned below. The TEU capacity of each line has considered for the listing.

APM- Maersk ranked 1st over the years in the 10 largest containership operators(By capacity). The AP Moller Maersk has established in Svendborg, Denmark way back in 1904 with the name of Dampskibsselskabet Svendborg. And the Moller family’s 2nd company, Dampskibsselskabet af founded in 1912. In 2003 both companies merged as AP Moller-Maersk. The Maersk fleet has 707 ships to handle 4,192,742 TEUs. The total fleet includes 314 of Maersk owned ships which could handle up to 2,356,393 TEUs. And the balance 393 ships are charted ships which handle 1,836,349 TEUs, 44% from the total capacity. Maersk has 18 ships in order book with a capacity of 42,670 TEUs.

Ocean Network Express established on July 7, 2017. ONE formed with the integration of ‘K Line, MOL and NYK. The company set in Japan and have regional headquarters in Hong Kong, Singapore, UK, USA and Brazil. Total of 1,581,368 TEU capacity handles with 221 ships and 75  ships with the capacity of 543,028 TEUs owned by ONE. And the balance of 1,038,340 TEUs from the 146 of charted ships.  Charted vessels count for 66% of the total fleet.

The evergreen group established in September 1968 in Taiwan. The line launched its first full container service in 1975, connecting the Far East and the US East Coast. The Evergreen fleet has 200 ships to handle 1,276,568 TEUs. The total fleet includes 109 of Evergreen owned ships which could handle up to 566,051 TEUs. And 56% of the total fleet covering 91 ships are charted ships which handle 710,517 TEUs. Evergreen has 69 ships in order book with a capacity of 557,002 TEUs.

Hyundai Merchant Marine established in 1976 in Seoul, South Korea. HMM has services to more than 60 sea routes and over 100 ports of call. In April 2020, HMM started a new cooperation with Hapag-Lloyd, ONE and Yang Ming as a full member of “THE” Alliance. HMM handles 484,526 TEUs from the global container capacity with a 67 fleet size.  The capacity of 233,598 TEUs in 20 ships are HMM owned and balance 47 ships are with a capacity of  250,928 TEUs are charted ships. HMM has 16 ships in the order book and owned the world largest container ship- HMM Algeciras. HMM Oslo, HMM Hamburg and HMM Dublin also in the same capacity as HMM Algeciras- 24, 000 TEUs. Company has ordered 12 ships from the same TEU capacity. As well 16,00 TEU ships which will deliver in 2021.

Pacific International Lines incorporated on the 16th of March 1967. Company Founded by Mr Chang Yun Chung and ten assembled shareholders in Singapore with two former Dutch ships ‘Kota Singa’ and ‘Kota Naga’. PIL handle 392,410 TEUs from the global container capacity.  A capacity of 157,057 TEUs in 69 ships are PIL owned and balance 50 ships are with a capacity of  235,353 TEUs is charted ships. Charted ships count for 60% of the total fleet.

Disclaimer: Listing is as per the available market information and Daily Logistic hold no responsibility over them.

Top 10 Port Operators In the World

Import Security Filing (ISF)- What You Should Know?

What are Shipping Alliances? And Their Use

What is the Difference between Bulk and Break Bulk Cargo

To be updated with all the latest news, offers and special announcements.

What are Shipping Alliances? And Their Use

Everything to know on Omnichannel Fulfillment

Top 10 Port Operators In the World

What is Bill of Lading? BL Explained in 10 mints